If we think of algae at all, we may envision green over-fertilized ponds or the kelp forests of the Pacific coast. I didn’t have to go any further than my yard to see that that’s too narrow a view. Observe the photograph below. The leaves are those of Chrysophyllum oliviforme or satinleaf, a small tree native to Belize, the Greater Antilles, the Bahamas, and south Florida. It is distinguished by foliage that is dark green and glossy above and a lustrous, reddish-brown  below. 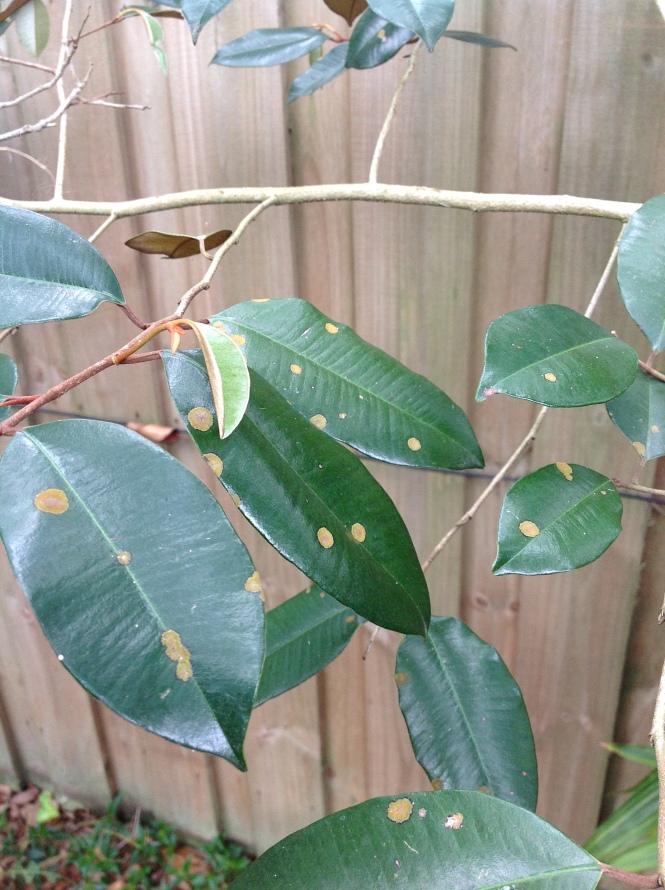 The leaves in the photograph are host to a filamentous green algae of the genus Cephaleuros (perhaps the widespread C. virescens), an epiphytic (or parasitic) green algae that forms small colonies (ca 1-2 cm in diameter) on leaf surfaces. Sometimes called green scurf or red rust, especially in the tropical nursery trade, it is one of the few algae parasitic on higher plants. Colonies of C. virescens develop in the leaf sub-cuticle but don’t invade living cells. 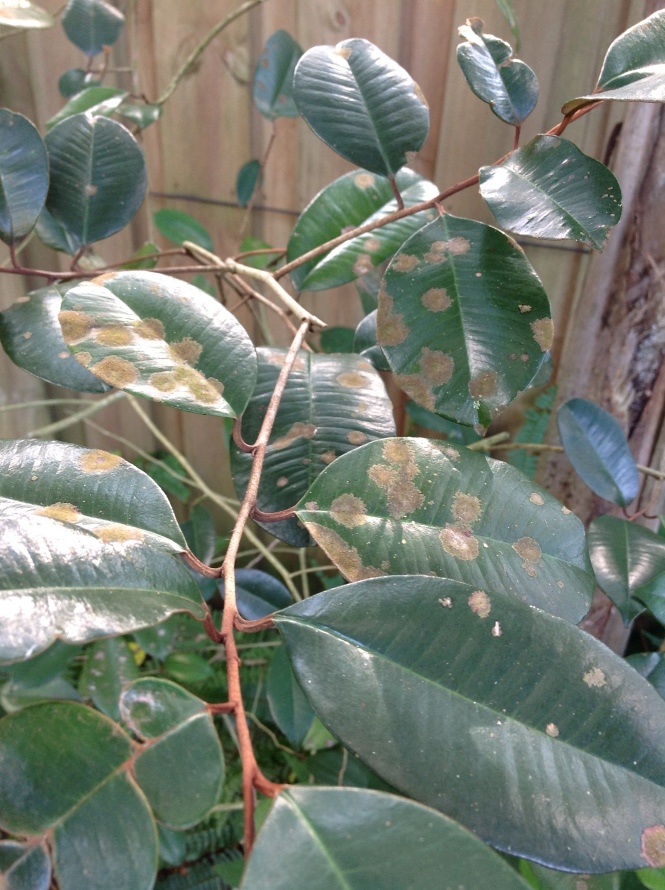 A relatively dense distribution of Cephaleuros on a satinleaf branch

The genus Cephaleuros is found widely throughout the humid Neotropics and apparently is native there and perhaps in south Florida. As this tree originated in Homestead Florida, it is probable that the algae did as well. 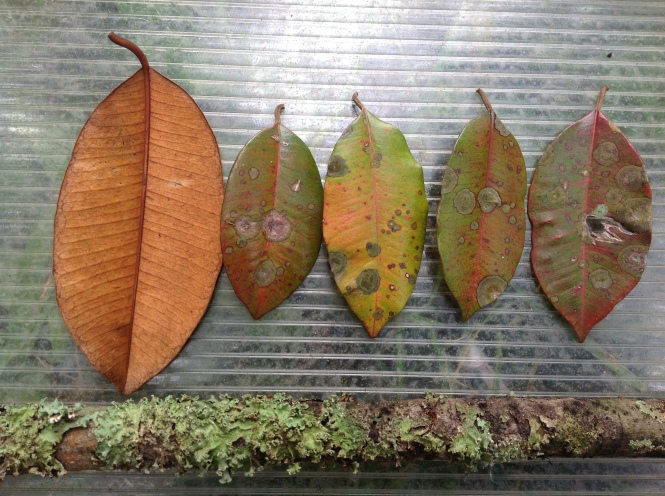 Five Chrysophyllum leaves, the left one with undersides visible, the others showing varying leaf pigmentation and algal colonization. 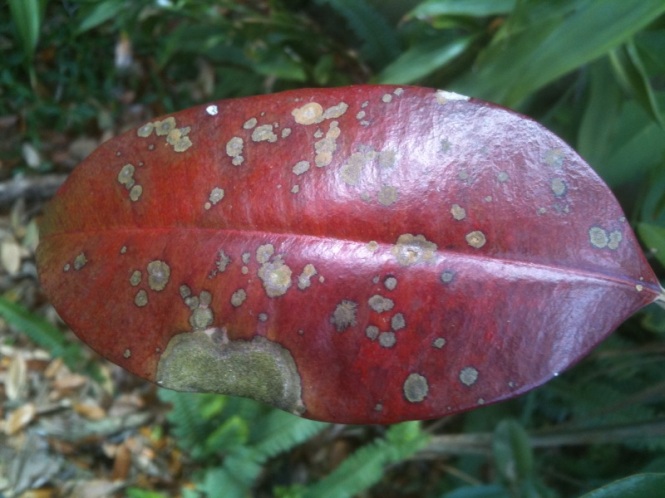 The algae produce structures (gametangia) that release sex cells as well as stalked sporangia (see photo) which liberate asexual swimming spores (zoospores). When sporangia are present, the center of the colony is reddish in color. Around the center of the colony is a greenish band of sterile growth. The presence of water on the leaf surfaces is important for survival and dispersal of gametes and spores. Probably rain drops aid in distributing both of them.  Colonies are found predominately on leaves from lower branches of the tree where humidity is usually somewhat higher. That the visible colonies appear to be lacking a reddish sporangial area may be attributable to the season when the photographs were taken-the winter dry season when reproductive  activity is reduced 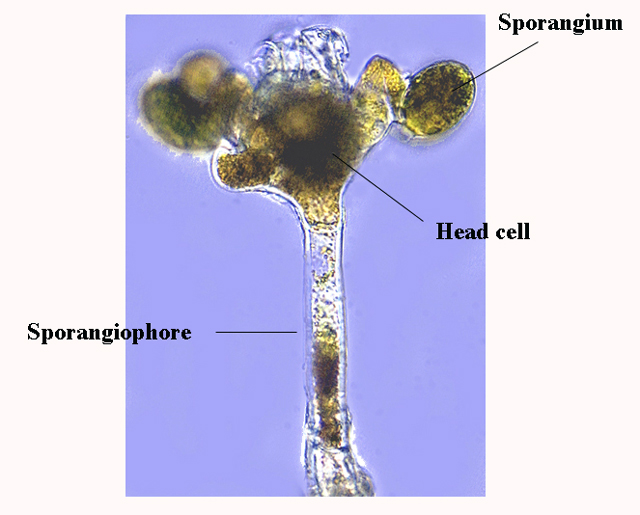 The genus Cephaleuros is a member of a family (Trentepohliaceae) of six genera, an exceptional group  that, unlike  the great majority of green algae  which are aquatic,  occurs only on subaerial substrates.  These substrates include, depending on genus, soils, rocks, buildings, bark, leaves, plant stems and fruit. The genus Cephaleuros is a strict epiphyte. Most other genera in the family may be found on leaves but in suitable conditions, also on other solid surfaces. Some species can damage human structures- members of the family are among the agents responsible for biodeterioration of concrete buildings, as reported in Spain, England and Scotland. One genus, Stomatochroon, is even more specialized than Cephaleuros- it is found only in the air spaces within leaves, and around the stomata (surface leaf pores through which gases are exchanged), of tropical plants.

In my satinleaf  tree,the colonies  apparently don’t  penetrate very far into the leaf and consequently are not visible on leaf undersides. Under nursery conditions, however, more serious infections may develop. In fact, economically important species like tea (Camellia japonica, evergreen magnolia (Magnolia grandifolia), and guava Psidium guajava develop leaf lesions, and  the guava fruit damage, to the extent that some nurseries apply copper-based herbicides and modify cultivation practices to control the algae. Poor nutrition, wet soils and high humidities are predisposing factors. In many cases, however, C. virescens is considered a minor or trivial problem while the more serious injury is caused by another  species- C. parasiticus (Nelson 2008). Distinguishing the two is difficult  but C. virescens is described as invading only the sub-cuticular  layer while C. parasiticus penetrates the interior tissues of host foliage.

In Gulf Coast area nurseries of the U.S., Cephaleuros is recorded on 287 vascular plant species and cultivars, including 80 susceptible to stem infections. In Florida, twigs and limbs of carambola (Averrhoa carambola) trees are attacked by Cephaleuros. It is also common on avocado, especially on low-hanging branches.  The leaf spots are often seen and reported by homeowners but the effect on avocado yield is usually insignificant. In my yard, the colonies occur also on one other species- a large staghorn fern (Platycerium bifurcatum) growing adjacent to the infected satinleaf (see photo).  Otherwise there are no other plants (including  three other satinleaf trees growing about 8 meters away) that host Cephaleuros in the  yard. 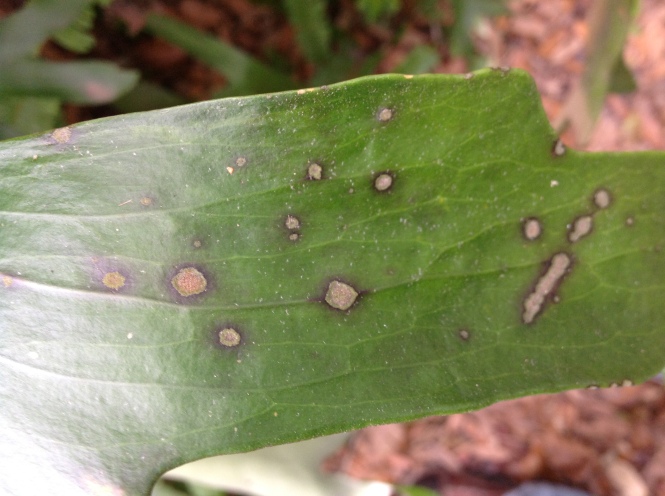 Interestingly, C. virescens can combine with certain fungi (e.g, the genus Strigula) to form epiphyllic  (growing on leaf surfaces) lichens. It starts with an algal thallus being colonized by fungal spores. On many colonized leaves, both the lichen and algae occur. The lichens appear as grey-white crusts 1-10 mm in diameter on upper leaf surfaces. I have been unable to conclude that any of the epiphyllic growth on satinleaf  in the yard is lichen in nature, although what could be small epiphyllic lichens do appear on other plants that lack algal colonies. More on this later.

Among the references consulted were the following: