Departing from the usual focus on local creatures, but adding to discussions on toxic plants, I introduce Cerbera, a genus of small evergreen trees belonging to the Apocynaceae- a family full of toxic plants. The genus includes 9 species found in tropical and sub-tropical Asia, Oceania, east Africa and Australia.  All parts of the Cerbera tree are toxic, containing cardiac glucosides which block the transmission of electrical impulses in the body (including the heart). 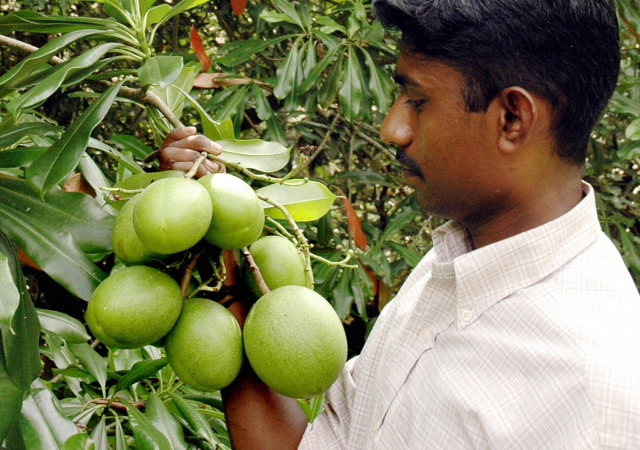 Fruits of the suicide tree.

Cerbera odollam is a small tree native to India, Indian Ocean islands, northern Australia and some Pacific Islands. It is especially common along the coasts of southern India. The tree produces large apple-sized fruits and like many other species of the Apocynaceae, contains a milky latex that includes toxic alkaloids. The trees goes by the  common name, at least in India, of the “suicide tree”. Often grown as a hedge between properties in India, this plant would hardly seem fitting for home plantings, although, given its colloquial name, perhaps it was conveniently located for some tortured souls. In addition, we have the following recent news item:

Mar 3, 2016  ABC News.go.com  Headline: “Illinois mom warns about seeds from the suicide tree after child’s death”. The text of the article explains that  the mother wanted others to know of the danger of ingesting “pong-pong” (another colloquial name for C. odollam) seeds. Cases of poisoning from these seeds still occur but were once more common and are quite rare in the United States. Ingestion of the seeds is known to affect the heart similar to digoxin, a heart drug, and  to cause arrhythmia and cardiac damage.

Other genera in the family that were subjects of earlier posts on this site  under Plants (with photographs), include the highly toxic Nerium oleandera, tall shrub, native to warmer regions of the Old World and extensively planted,  and Thevetia peruviana ( tall shrubs or small trees from the Neotropics planted for their large  peach-colored flowers but highly toxic)