Puffballs and their allies form a group of mushrooms in which spores are released through an aperture that forms on the top of the mushroom. The photos below are of mature puffballs, Lycoperdon pyriforme, (reclassified into the genus, Morganella), a species which is widely distributed around the world. 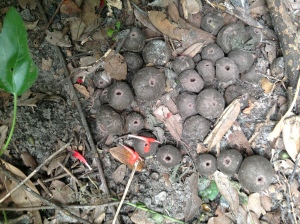 A cluster of mature puffballs

Some sort of mechanical force such as an animal contacting the puffball accidentally or otherwise, or perhaps just a raindrop, is needed to bump or depress the thin skin of the puffball and force out a cloud of tiny spores through the aperture. 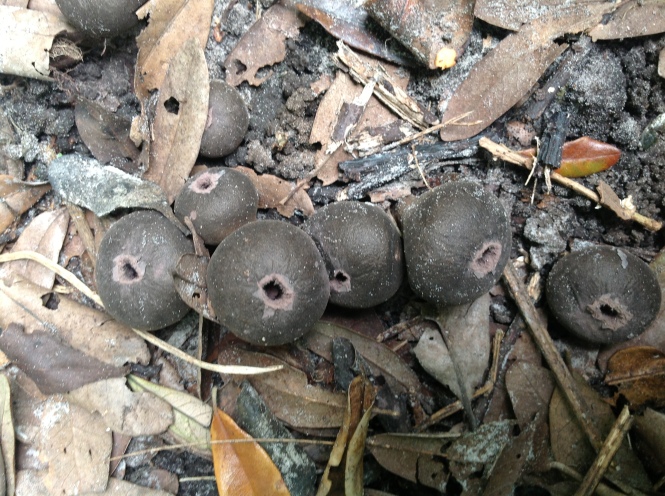 The number of spores present in a single (large) puffball has been estimated to be in the trillions and collectively they resemble a puff of smoke (see photo). In the immature stage of development, the interior of the puffball is white and somewhat solid. This stage is edible although not one esteemed by mushroom gourmets. Given that immature puffballs  externally resemble immature stages of species from the genus Amanita, some of which are very toxic, thinking of puffballs in terms of food rather than as objects of interest is probably not advisable.

A cloud of puffball spores released following a touch. Photo from wiseacre-gardens.com

Puffballs have no specialized spore-bearing tissue layer as do the boletes which produce spores from the surfaces of densely packed pores on the underside of the mushroom, or the agarics which produce spores from lamellae (gills). All three groups, however, produce spores from specialized cells called basidia and therefore are considered members of the Basidiomycetes, one of the two large subdivisions of the True Fungi. Puffballs are found  on the forest floor or on dead wood.  There, like other saprophytic fungi, they convert carbon fixed in soil organic matter or in wood into atmospheric carbon dioxide and also convert  organic nitrogen compounds and minerals into nutrients usable by vegetation. The puffballs from my yard occurred on shaded sandy soil under trees although the species more typically grows on wood. Possibly the long mycelial threads or rhizoids (see photo) which are found beneath the surface of the substrate were in contact with, or infiltrated, buried wood. 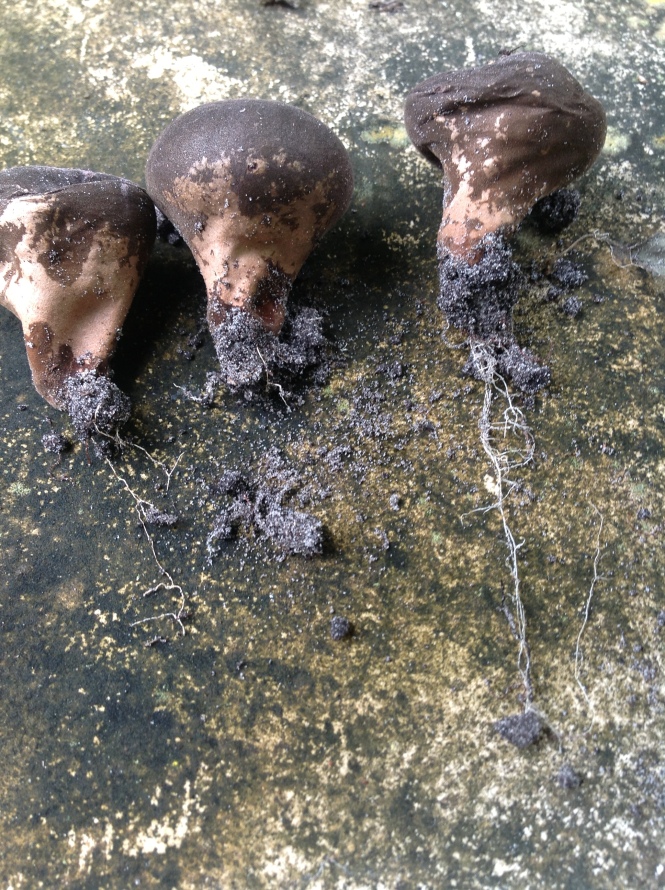 The root-like rhizoids consist of mycelia that absorb nutrients.

An old earth-star that has already released its spores. Top view. The globose inner layer is about 2 cm wide.

Earthstars are closely related to puffballs but differ in having two skin layers, an inner one similar to the puffball that encloses the spore-producing tissue, and an outer one which is tough and folds back, propping up the earthstar. Presumably this position enhances the dispersal of the spores by increasing  exposure to wind, rain, and passing animals. Some species of earthstar are hygroscopic meaning that the rays of the outer layer absorb moisture, opening up in wet weather.  In the photo below notice that in this specimen the rays are not equally bent, forcing the earth-star up on an angle. 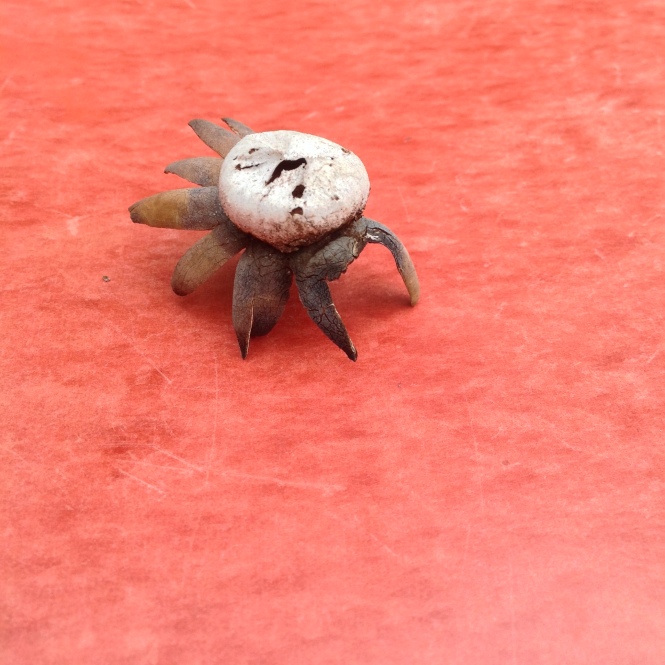 This earthstar is unevenly propped up on its rays giving it a crab-like form.